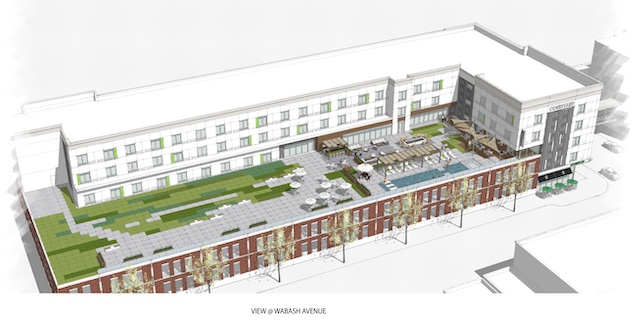 On Wednesday it was announced that  Courtyard by Marriott that once had plans to be built at 8th and Cherry Streets will now be built at 7th and Wabash on the site now occupied by the Vigo County School Corporation administration building.

The Capital Improvement Board purchased the property earlier this year from the School Corporation and now they plan on turning it over to the City Redevelopment Commission.

The Redevelopment Commission will now put the property at 8th and Cherry up for sale.

The CIB anticipates a group called Terminal Hotel Partners will buy the property, with the promise to build the hotel and parking garage.

Plans call for a three-story hotel will be built on top of a parking garage. That parking garage will be either two or three stories tall. There will be retail space on the ground level.

It would be a $20 million project.

Construction for the project won’t begin until the convention center is complete which will be in April or May 2022.