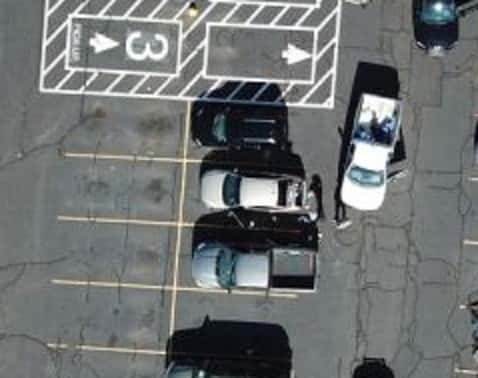 VIGO COUNTY, Ind.  – No charges will be filed in a fatal shooting that happened back on July 29th in the parking lot of the Kroger store in U.S. 41 south.

The Vigo County Prosecutor’s Office says Otis Parks said that a truck driven by Sean Martin started following him on 7th Street and began driving around him aggressively.

Parks said he pulled into the back entrance to the Kroger parking lot, and Martin crossed lanes of traffic to follow him onto the parking lot.

Parks pulled into a parking space and then Martin pulled behind him blocking him in.

Martin then confronted Parks and reached into the vehicle and grabbed him by the neck.

Parks retrieved his handgun from the glove box and shot Martin twice.

Security video and witnesses confirmed the account of events.

Parks is a legal gun owner.

Vigo County Prosecutor Terry Modesitt said that this was a case of self-defense and no charges will be filed.

He added that Martin was apparently under additional stressors in his life and that may have contributed to events.

Full press release from the prosecutors office is below:

On July 29, 2020, a shooting was reported in the parking lot of the Kroger store located on South US 41 in Terre Haute, Indiana. Members of the Vigo County Sheriff’s Department responded to the scene within minutes. Upon arrival, it was learned that Otis Parks had shot Sean Martin two times. Immediately after the shooting, Mr. Parks called 9-1-1 to report the incident. Mr. Parks then followed all instructions of the dispatcher and of the deputies upon their arrival. After a full investigation by Detective John Newman and the Vigo County Sheriff’s Office, Prosecutor Terry Modesitt and his team that reviewed the case have determined no charges will be filed arising out of this incident.

During the course of the investigation, witnesses at the scene were interviewed. Later that same evening, Mr. Parks accompanied detectives to the Vigo County Sheriff’s Office, waived his rights, and gave a statement to the detectives about what had transpired leading up to the shooting. Mr. Parks reported that he had been going to Kroger after getting off work for the day. While travelling south on Seventh Street, a white truck began driving at and around him aggressively, accelerating and braking quickly in the vicinity of his car. He further said that when he turned from the right lane into the back drive leading to Kroger, the white truck abruptly turned from the southbound left lane going across traffic. The truck then followed him into the parking lot and stopped in the lane just behind his parked car. The driver of the truck then got out, came around the front of the truck and confronted him. Mr. Parks reported that when he saw the white truck park and block him in, he retrieved his handgun from his glovebox. He then exited his vehicle with the gun down at his side, approached the man and asked “What’s your problem, man?” Parks said that is when the man grabbed him by his neck. In response to being grabbed, he shot the man twice. He then disconnected the phone call he was on and called 9-1-1. Mr. Parks is licensed to carry a handgun.

Witnesses from the parking lot confirmed the information relayed by Mr. Parks. One female witness reported she exited Kroger and was walking west in the parking lot when she heard tires squealing. She looked and saw a white pickup truck run into the stop sign at the southwest corner of the Kroger, back up and quickly turn into the parking lot. The truck parked in the middle of the row, a white male got out, left the door open, and walked around the front of the truck. She stated the driver was flailing his arms and appeared upset. She reported that a moment later she heard two “pops” in close succession which she assumed were gunshots.

Surveillance video from Kroger also confirmed much of Mr. Parks’ statement. (What was not confirmed was due to the view being blocked by the white truck.) Video surveillance showed the white truck being driven by Mr. Martin take a wide turn around the south west corner of Kroger in pursuit of Mr. Parks. The white truck strikes a pedestrian crossing sign at the edge of the roadway, spinning the sign as it scraped along the side of the truck. The truck then accelerates while turning with the tire of the truck lurching over the curb at the end of the parking lane. As Mr. Parks pulls his car into a space, the white truck stops immediately behind the car.

As noted above, Mr. Parks reported Mr. Martin grabbed his neck. The female witness observed Mr. Martin to be upset and flailing his arms. While the video is pixelated due to the distance from the camera, it is consistent with these two reports in that it shows Mr. Martin leaning toward Mr. Parks and lifting his right arm and hand up. The two are then no longer visible as the cab of the truck blocks the camera view.

In announcing that no charges will be filed, Prosecutor Modesitt explained “In our current times, people are under a lot of stress. Mr. Martin was apparently under additional stressors in his personal life. It is tragic that Mr. Martin lost his life. And Mr. Parks was very upset that he had shot and killed a person. But these facts applied to Indiana law demonstrate that Mr. Parks actions are covered by the self-defense law and he will not be put in legal jeopardy for his actions.”